Results of the Survey on Macau LGBTIs 2016

On 12 May 2016, Rainbow of Macau releases the results of the “2016 Macau LGBTI Survey”, conducted by the Organisation, which is also the second occasion of such survey.

The survey was conducted between 27 March 2016 and 10 April 2016. Only responses from those who usually resided in Macau and reported to be gay, lesbian, bisexual, transgender, intersex, queer, and questioning about their gender identity or sexual orientation were accepted as valid.

The survey has attracted more than 800 responses, among which 715 valid. In comparison to the first survey of its kind conducted by the predecessor of Rainbow of Macau, which gathered 186 valid responses, the results of this survey are more representative of the LGBTI community.

After studying the methodologies of studies on LGBTI people conducted by other institutions, Rainbow of Macau has decided to take a quantitative approach. Questionnaires were distributed online, and interested individuals responded to the questionnaire at their conveniences.

In order to provide the most delicate data, Rainbow of Macau has divided the notion of gender from the mainstream perspectives to the more detailed “biological sex” and “gender identity”; while regarding the sexual orientations of respondents, their biological sex prevails.

88 per cent of the respondents are unaware of anti-discrimination legislations in Macau, despite the fact that employees and job seekers are legally protected from discrimination on the ground of sexual orientation. The lack of knowledge of the law virtually undermines the effectiveness of the Principle of Equality in the Macau’s labour law. The government should raise public awareness about Article 5 of the Labour Relations Law to ensure that lesbian, gay and bisexual people in Macau effectively enjoy the protection.

Considering discrimination in Macau, only approximately 8 per cent of respondents are unaware of the issue in the city. A majority of respondents considered that government bodies and education institutes’ work on de-stigmatisation were inadequate. In addition, 81 per cent of the respondents thought the government was responsible for the social inclusion of LGBTI people. It suggests that the government and education institutions should promote the public understanding of the diversity of sexual orientation and gender identities, by prioritising gender equality in school curricula and public awareness campaigns.

The final question required respondents to grade their happiness indices, on a scale of 1 to 10 with 10 being very happy. Nearly 60 per cent of the respondents graded five or below. Rainbow of Macau interprets that the majority of LGBTI people in Macau tend to be unhappy.

“It is our pleasure to see more members of the LGBTI communities stand up for their rights and interests, considering the much higher response rate of this survey, compared with our last research.” Said Mr Jason Chao, spokesperson of Rainbow of Macau. “Although the government had emphasised for quite some times that they did not discriminate against sexual minorities, results from this survey showed that the communities don’t think likewise, with the fact that the government hadn’t done enough work in this respect.”

Download the files of the Results of the Survey on Macau LGBTIs 2016:

Tables and Charts of the Results of All Questions 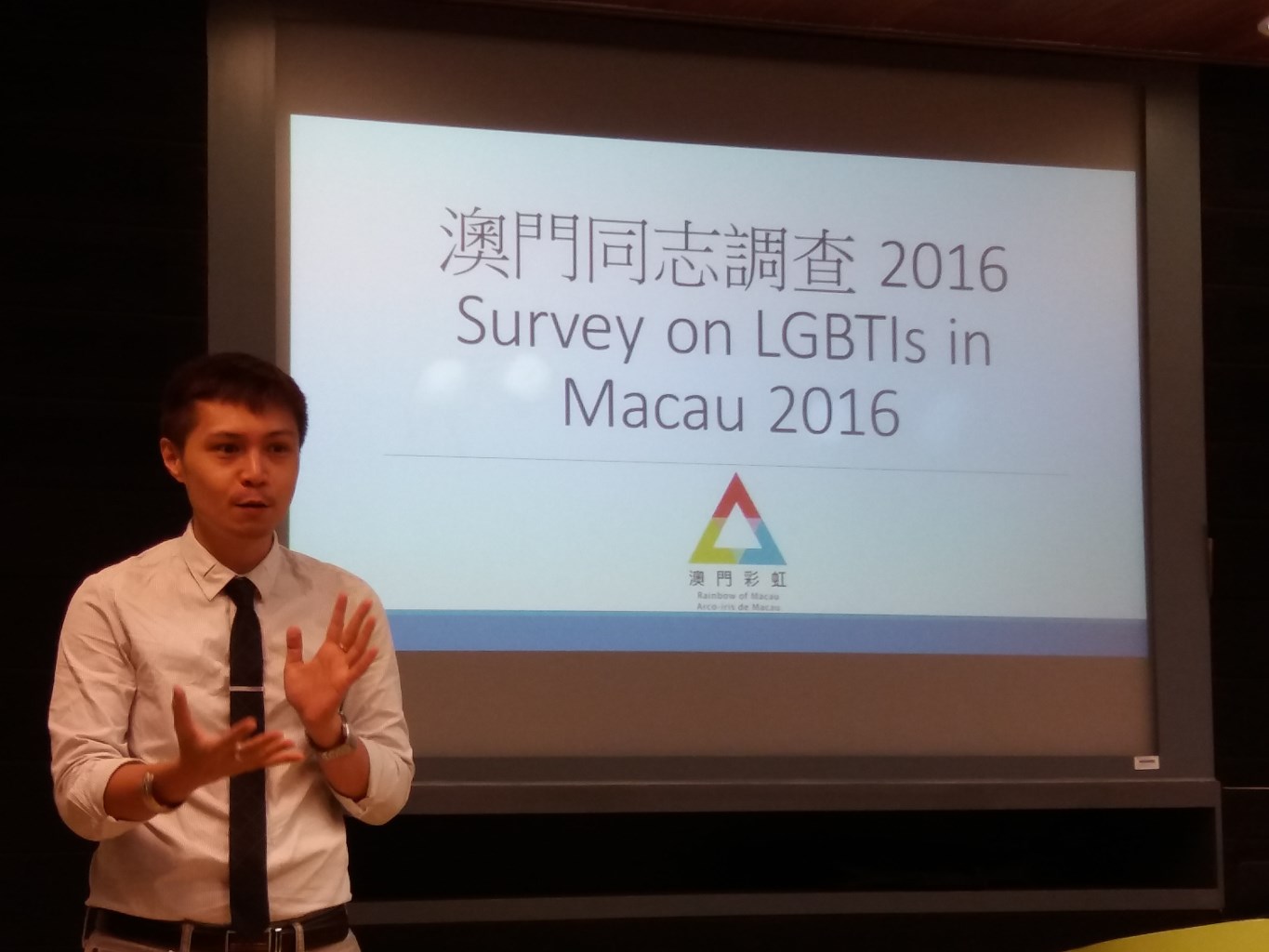 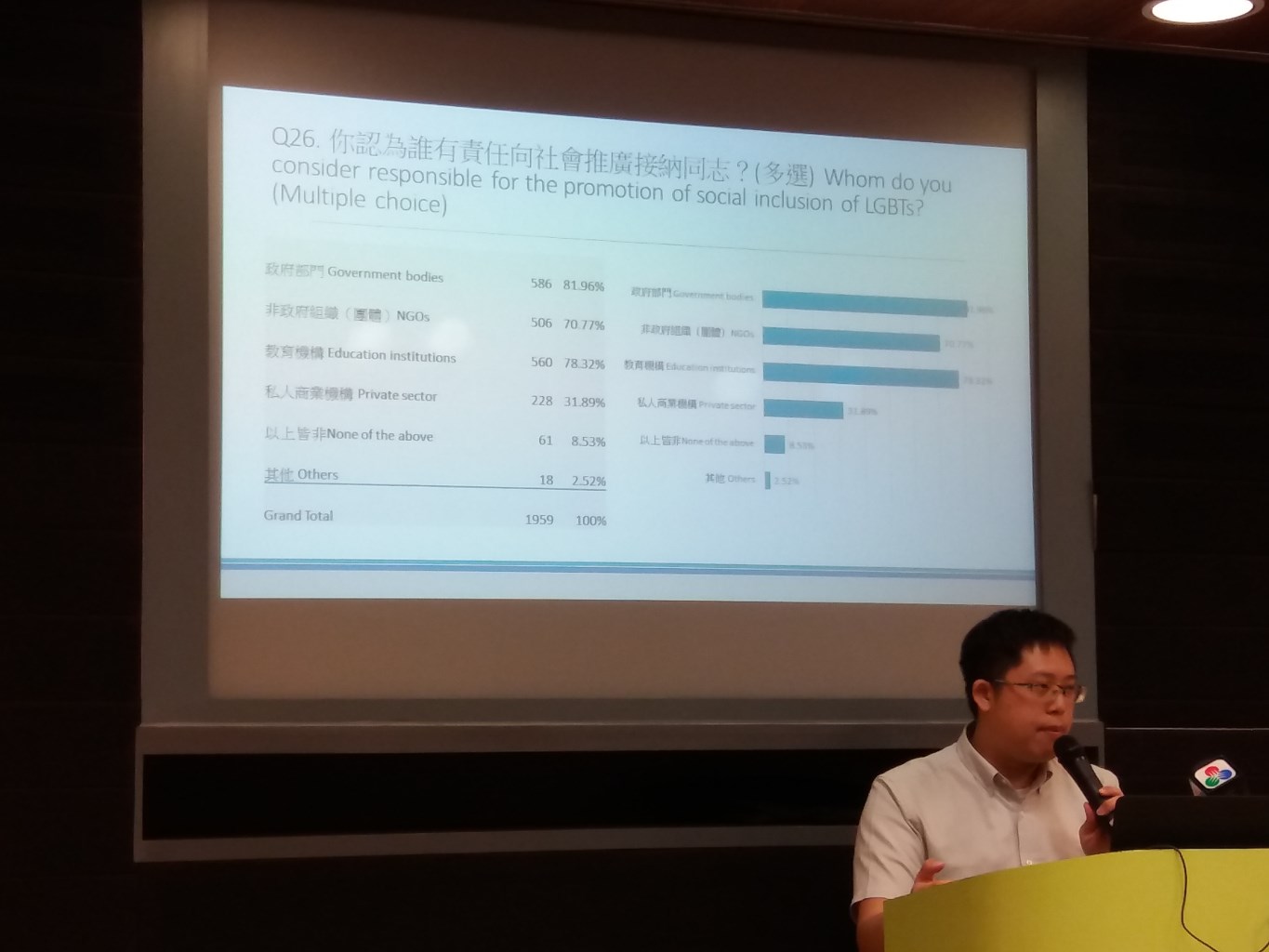