Rainbow of Macau reaffirms our stance on domestic violence that any act of violence in domestic settings – however “trivial” or “accidental” – should fall into the scope of public crimes.

It has come to our attention that the Domestic Violence Bill is close to completion and will be submitted to the Executive Council shortly. Rainbow of Macau urges for the restoration of “same-sex couples/co-habitants” in the domestic violence legislation on the following grounds:

In the concluding observations made by the UN based on its initial review on the ratification of ICESCR in Macau, the Macau government is asked to adopt comprehensive anti-discrimination legislation covering LGBT people. LGBT equality is now an internationally recognised human right and, under the ICESCR, Macau is obligated to realising UN resolutions in local legislation and in public policies. In this sense, the scope of protection under the proposed domestic violence law should be inclusive of same-sex couples. Otherwise, the exclusion will result in a contravention with the ICESCR being ratified in Macau in accordance with the Basic Law. The Rainbow of Macau is looking closely to the development and will submit an urgent appeal to the UN if the Macau government fails to adopt the recommendation made by the UN.

Legislation in Macau has developed closely with the legal system of Lusophone countries, especially Portugal, even after the change of sovereignty. One of the arguments once put forth by the IAS and the DSAJ for dropping same-sex cohabitants was that the inclusion of same-sex relationships would make the domestic violence legislation “inconsistent” with that of relevant provisions in the Penal Code. However a research into the Portuguese legislation shows otherwise that when the Portuguese domestic violence law, with the inclusion of opposite-sex and same-sex partners, was made in 2007, same-sex marriage had not been legally recognised in Portugal (recognition started in 2010). The leader of the Lusophone legal system has made a showcase for Macau how legal protection for same-sex partners from domestic violence can be done without “altering the legal order”. The government’s argument for the denial of same-sex couples to equal protections in favour “maintaining consistency” should be invalidated.

Rainbow of Macau appeals to Secretary Chan to act constructively and firmly for the LGBT community while her term lasts in matter of weeks by directing the DSAJ to amend the domestic violence bill in conformity with international standards of human rights required by the UN. 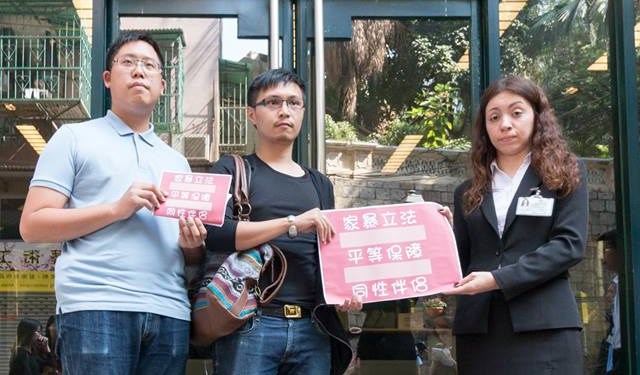